The post’s about a rich, amber-colored sweet wine, flagship of the eastern Mediterranean island of Cyprus. Find out it’s recent legislation issues, distant relation to Port, ancient history, basic tasting characteristics, and whether it is fortified or not. A beautiful guest post by friend George Loukakis, who serves as sommelier in Cyprus. Welcome George!

Commandaria wine(s) can be both fortified (15–20%) and without fortification. Their sweetness is entirely natural as a result of the high sugar levels wine grapes can achieve in Cyprus’ warm climate, later concentrated by the drying process the grapes undergo before vinification (passito). (grapes can be late harvested, but then loose the Commandaria classification)

The historic Commandaria wine style dates back to the late 12th century, when Guy de Lusignan was gifted the island by King Richard ‘the Lionheart’ of England, who had captured it during the Crusades. De Lusignan fled to Cyprus after he was defeated and run out of Jerusalem. He imposed feudal rule and remained on the island until his death in 1194. The name ‘Commandaria’ comes from the Grand Commander, the feudal land belonging to the Knights of St John of Jerusalem, where the original wine-producing vineyards were located. 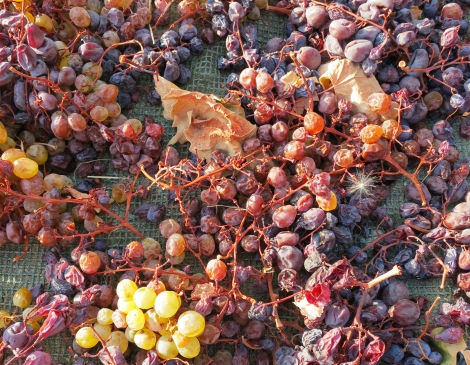 Commandaria, southern Europe’s most eastern wine region, has much in common with Oporto & Duro, its most western wine region in Portugal (some 2,300 miles away). Both regions produce sweet, fortified wines and owe their existence to England’s historic thirst for rich wine and war. Additionally, both regions have had their name and styles protected by law and are shipped down a “river” for ageing, to port cities which are the second largest in their respective nations.
One of the most distinct differences between Commandaria and port is color: while Commandaria has a deep amber hue which gets darker as the years go by, port is red in its youth and bricks with age. Some Commandaria is made using a solera-style ageing system similar to those used to age sherry in Jerez (solera involves blending wine batches from successive years to create consistency of taste). There are even single-vintage cuvees produced in exceptional years.
Only a small quantity of Commandaria is made each vintage, hence, obtaining the wine is significantly more difficult than obtaining its western equivalent’s port or sherry. This rarity adds to its mystique and helps maintain its firm ranking among the world’s classic wines.

The ancient juice of Commandaria

Basic tasting Characteristics:
Color: The color of Commandaria is directly related to the age of the wine, which is the time the wine was matured in casks plus the time it was aged in bottles. On the whole, the color of Commandaria is within the color range of honey with yellowish-goldish tones, made lighter or darker depending on its age. Young Commandaria has lighter honeyish hues which become darker with age. An important factor in the ultimate color is the proportion of the grape varieties used. Commandarias with a high percentage of the white Xynisteri variety are usually lighter in color tone and are almost always within the various shades of the color of honey. It cannot easily be said that Commandaria is distinguished for the clarity of its color, for it is often more cloudy than any dry wine. This does not affect adversely either its aroma or its taste. Although to some it might be aesthetically off-putting, this turbidity points to the fact that what the drinker is tasting a matured wine which, in the course of time, has naturally acquired a not so transparent color.

Aroma: Three main factors actively contribute to the aromatic profile in Commandaria: these are the grape variety, the addition of alcohol, and, naturally, the duration and quality of ageing. Regarding the variety, after several decades of experience, it is now clear that Xynisteri gives the wine greater aromatic finesse and intensity – even though a small quantity of Mavro can add some complexity to the nose. The addition of wine alcohol (if will be) after the completion of alcoholic fermentation plays an important role in the aromatic structure of Commandaria and raises the potency of the alcohol content from about 10-12 degrees (achieved through fermentation) to 15 degrees. This additional alcohol content stabilizes the wine and increases its life span but at the same time could neutralize to a greater or lesser extent, depending on circumstances, its original bouquet. However, good specimens of Commandaria are not only immune to aromatic deterioration through increased alcoholic content, but, on the contrary, the presence of alcohol results in greater aromatic complexity.
Without the addition of alcohol, in the nose we find greater finesse and more pronounced fruit intensity (since the unfortified Commandaria is a new style, we don’t have aroma profiling through the years)

Naturally, ageing is a catalytic, if not the overriding, factor in the aromatic evolution of Commandaria. Those who have been lucky to taste properly aged Commandaria that has remained “undisturbed” in a good oak barrel and then in a bottle for, say, a hundred years, cannot but admit that what they encountered was nothing less than a myth or, if you prefer, the nectar of the Olympian Gods. Out of a glass of aged Commandaria you can expect to emerge, all at once, multifarious intense aromas – typical of Commandaria – that remind you of raisins, grape-juice syrup, walnut kernel, coffee, chocolate, quince-pulp jelly, honey, dried figs and apricots — the list is endless. This of course is not true of young samples of wine that are rushed on the market before going through the cycle of at least ten years of mellowing in a cask and ageing in a bottle — a minimum period if we are talking about quality Commandaria.

Taste: What does one expect from a dessert wine? What else but a sweet taste due to its unfermented sugars? Except that in the case of Commandaria this sweetness that every lover of dessert wine expects goes rather beyond that of many other dessert wines. This increase is due partly to the greater quantity of natural unfermented sugars in the wine and partly to the wine’s comparatively reduced acidity, which is in fact quite low, especially in Commandaria whose composition includes a fair amount of grapes of the Mavro variety. The concentration of taste in the wine is closely linked to the length of the ageing period it has gone through. A wine’s age is equally important as regards its aftertaste. Young Commandarias that have been aged for no more than two or three years have a rather short aftertaste that lacks intensity, whereas older wines wind up with a long, intense and complex aftertaste. The aromas that diffuse inside a taster’s mouth are similar to those that reach the nose, and often remind one of grape-juice syrup, raisins, dried fruits (figs, apricots), nuts, quince-pulp jelly, coffee and chocolate. 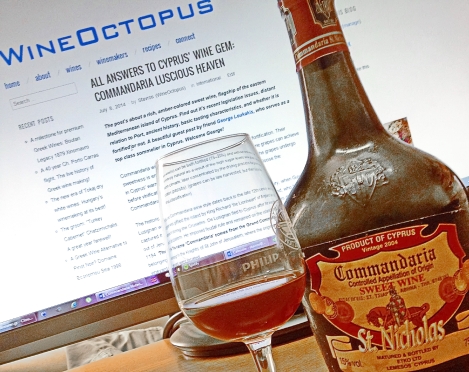 This is a label widely available in Greek market, by a large retail chain, and a very good introduction to the style of Commandaria.

Hazy medium brown color with orange hues. Complex nose, full of dried raisin, orange peel, nuts, coffee, dried figs, and some sweet spice (cloves and a bit of cinnamon). It’s long period of ageing in barrels, has given an extra aromatic touch of noble oxidative elements, mainly in the form of wax and glue.

Palate has a good flavor intensity with same aromas as those of nose, but with more freshness and fruit driven, and some hardly noticeable tannins. Acidity is medium giving a luscious sweetness in mouth (not cloying though) and a long dry fruit finish.

We need your opinion! Please leave a Reply below. Cancel reply